Cheerleaders, twirlers, band members and half the student body at Paco Rodriquez Middle School stampede in panic and horror as three aircraft drop out of the sky blocks from the school during an outdoor pep rally. The world as they knew it comes to a grinding, screaming halt. Tender Branches follows students and staff members as they attempt to come to terms with what has happened, and most importantly, survive in a world where everything they have come to rely upon just disappears. Middle school is a difficult time on a good day. Add the apocalypse and things really get interesting. Starvation, disease and death just aren’t supposed to be part of the experience. Follow Jumbo, Seth, Briley and the rest of the Paco Rodriquez Middle School community as they confront and explore what it means to survive together in their dark new world. Sorrow for what was lost is put off until another day, because today is about survival. The shadow of the reaper is ever present. Death used to be something you didn’t think about until you were 80. Now tomorrow is uncertain. The past is too painful to contemplate. But in the present, the community at Paco Rod has each other, and they use every minute, every resource, and every bit of human energy and resilience to survive. 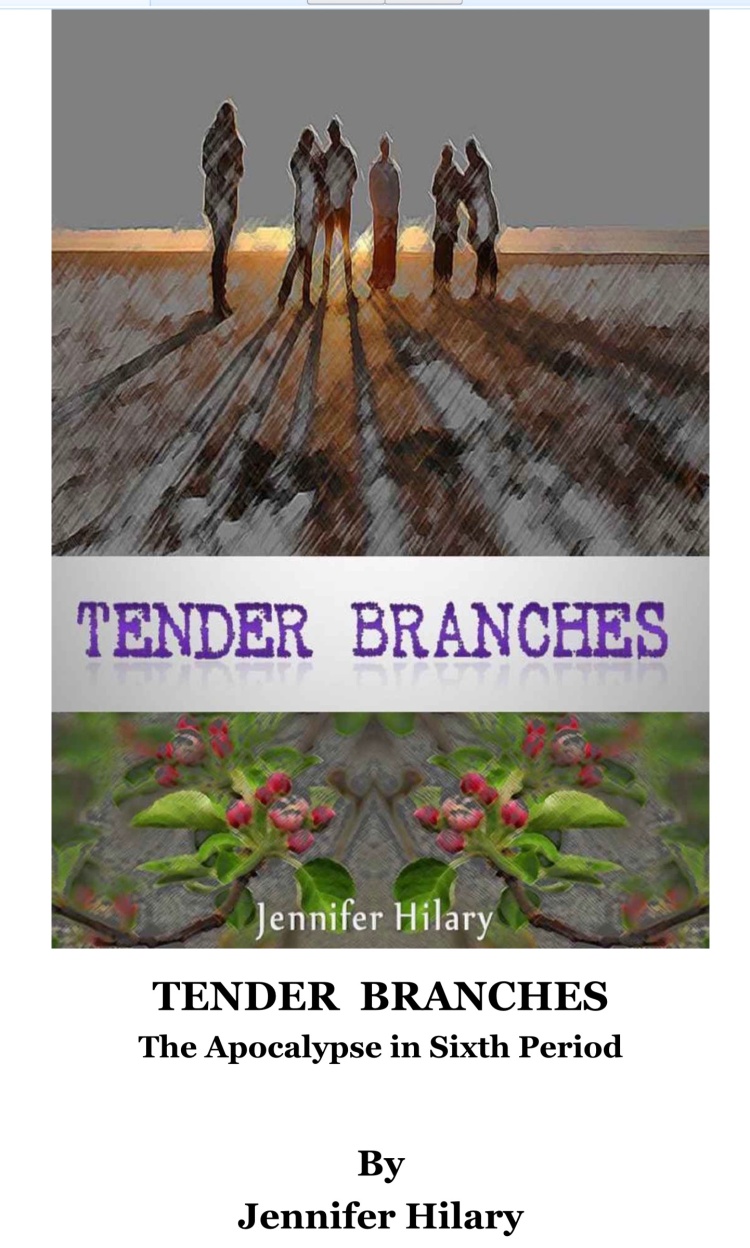 THE APOCALYPSE AND ME

I was born just five years after World War II ended. I watched a lot of movies about the war, all black and white, on my huge 1954 console TV with a 12-inch screen. If we couldn’t get the picture just right my father had to go out on the roof and adjust the antenna and my mother would stand in the yard and scream, “Bubby! Be careful! It looks fine now! Come down!” My father, who didn’t own tennis shoes, would be up there on that slate roof in his steel-toed, slippery leather-soled safety brogues, muttering “God Damn it all to hell” and then he’d come down. We would all breathe again.

But I digress. (It’s just that these visions and memories pop up and I can’t go on until I have shared them.) All those movies taught me about: AIR RAIDS! And that danger was reinforced in school where we had BOMB DRILLS. For bomb drills we went into the basement and stood with our right arm folded over our face. Later, for A-BOMB DRILLS we climbed under our desks. I figured that was because we had no chance anyway, so why bother getting in line and going down the steps to the basement.

Air raids, I knew from watching those movies, would be announced by a dreaded siren that started with a low drone and wound up to a scream. Then the planes would come. Actually, I don’t think our town had one of those sirens. But I feared that sound. Every plane that went over while I was out playing, I checked carefully, looking for bombs to come out of its belly.

Our town used to hold “Civil Defense” drills where the town fire horn (a huge honker with five or six locations around town) would give a coded number of honks (to keep the Russians guessing) and the town would come to a halt. Cars on the road were expected to pull over and the inhabitants to assume the protective position, pretty much just covering the face. They did a half dozen or so of these drills. They were uber creepy. Eventually, though, folks just kept driving and the town gave up.

We entered that strange period in history between the 1960’s and the 1990’s when the Soviet Union collapsed, where we just ignored the inconvenient fact that in a flash we could all become X-ray silhouettes on the wall. There were a few Ban the Bomb thingies in the ’50’s. And of course the Anti-war protests of the ’60’s, but they focused mostly on Vietnam. But I never quite was able to forget effectively. And then the movie One Day After came out. OMG. I was a young teacher and that movie burrowed itself into my mind for months. Reagan was President, and I became convinced (in a rather pragmatic way) that I would eventually die in a nuclear war.

That vision faded with time. Until. Yes, until. I read a book called One Second After about a North Carolina town after an EMP attack. My brain went on overdrive. The Internet was up and I began reading about new concepts like prepping and shelter. By this time I was teaching in a middle school and as I stood outside my classroom door supervising the chaos called changing classes, I began to wonder what would happen if we, at the school, suddenly lost it all: power, transportation, communication, food deliveries, parents picking up kids, toilets that didn’t work…. and Tender Branches was born. It is a story of survival. I made it as realistic as I dared, but so many of the other Doomsday books out there were really just gun porn and macho on steroids. I wanted to do better. I wanted real characters and at times I do have to deal with some violence if I hope to be realistic. The real Apocalypse won’t be a tea party. But this story is tame, in my opinion.

One of my colleagues, who was teaching a class on sustainability, decided to read it to his class. Fine with me. Turns out the scene where I describe a deceased teacher as having flies on her eyeballs triggered a child. Or so we heard from her father (who was/is a self-important twit with delusions of adequacy) OH DEAR, DID I SAY THAT OUT LOUD? WELL, FIRE ME. OH, WAIT. I’M RETIRED! OWN IT!

Oh, sorry, don’t know what came over me. Anyway, this father threatened to get us fired. Toxic parents are such a drain on a teacher’s energy.

The book was an Amazon best seller for a few weeks (in its genre) and I made enough money to pay a few months on the mortgage, but the money was nothing to me. I had people, hundreds of them, reading my book. That is soul satisfying and I was hooked. This book has been a favorite and the reviews (not all that many, but I don’t solicit or purchase reviews) are heart-warming to me. Phrases like “You have got to read this book!” and “This is what I have been waiting for in this genre!” were the high points of 2013 for me. And I was SO hooked. I wrote a sequel and then four more books in the same genre.

So am I a prepper? A survivalist? Not quite. I think back to my mother during the Cuban Missile Crisis, putting big cans of stewed tomatoes and a roll of toilet paper down in our cellar just in case New York City took a big one. Yes, I have a pantry full of stuff that constantly goes out of date. If it happens we’ll eat a lot of capers, sardines and cat food. I do raise chickens and geese and yes, they would come in handy. If pressed I have to admit that our chain of civilization has so many weak links it could send one to a shrink for meds if dwelt upon too intently. And that is where you just turn the whole mess over to God. So many nasty problems are so easily solved in that way!

I am a vertebrate mammal. I was born in 1950. I identify as a female. I like bald baby heads, fireworks and RF Delderfield. I will add more to this list as I figure things out. View more posts